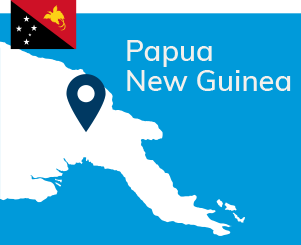 VSA has been in Papua New Guinea since 1970 and works with partners to strengthen the quality of education, community support networks and secure livelihoods for rural people.

Since 2005 we have concentrated our efforts to work in the New Guinea Islands' three provinces: East New Britain, West New Britain and New Ireland. Our volunteers work for local government and NGO partner organisations in such diverse areas as agricultural advice, gender equality, and IT training. VSA has a field office in Kokopo, East New Britain, staffed by a Programme Manager and a Programme Administrator.

Papua New Guinea has a majority Melanesian population of around six and a half million people. Numerous indigenous languages are still in use by people from a society that ranges from traditional village-based life to modern urban living.

Underlying the Papua New Guinean culture is the wantok system. Wantok, or ‘one talk’, refers to the people who speak your language or your extended family/clan; a Papua New Guinean's primary loyalty will be to their wantoks. The country is predominately Christian, with indigenous faith and spirituality still important to many local people.

VSA’s work in Papa New Guinea focuses on health, education, agriculture, nutrition, and prevention of domestic violence. This has enabled greater collaboration with our partner
organisations and volunteers. For example, providing capacity-building and project management support to the Mary Immaculate Sisters (FMI Sisters), resulted in the completion and opening of the first Safe House in East New Britain Province.

The major focus of our work with the health sector is supporting the government to halt and reverse non-communicable diseases. VSA continues to work and collaborate with the biggest hospital (Nonga General Hospital) in the New Guinea Islands region to improve health outcomes for the people of PNG. To address health equity issues, VSA worked with Nonga General Hospital to significantly improve clinical diagnosis and treatment practices in relation to T2 diabetes.

VSA also supported Fresh Produce Development Agency (FPDA) and the East New Britain Market Authority (ENBMA) to improve the livelihoods of vegetable farmers. Through improving skills in better sustainable horticultural practices, farmers were able to increase yields and improve the quality of fresh produce, resulting in more income. In the fisheries sector, we worked with the National Fisheries College (NFC) to strengthen its capacity in various areas.