A Cook Islands farmer’s dream to process kuru breadfruit into flour for local consumption and to export is one step closer thanks to help from Volunteer Service Abroad.

VSA volunteer Jeanette Daysh, of Palmerston North, has volunteered for the Cook Islands Civil Society Organisation Inc for nearly a year now, helping to strengthen local community groups and societies, and to support their structures and financial sustainability. 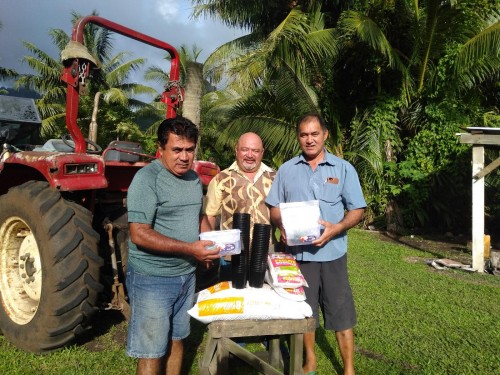 That, in turn, would help address a number of issues Rarotonga faces, including climate change, food security and job creation.

The dehydrated breadfruit makes amazing gluten-free flour. It’s low glycaemic index helps in the fight against obesity as eating food cooked with it keeps blood sugars even and the consumer stays fuller for longer. It is also diabetics friendly, uses crops that can be grown locally reducing the need for imports, and its manufacturing will create jobs in the Pa Enua (outer islands) - so it really is a win-win.

Danny’s idea came out of concern over the copious amounts of plastic packaging on imported flour, experimenting at first by growing small amounts of breadfruit and processing them into flour using his own funds.

He has already done the research - and budgets - to ensure his grand plan will work, he has distributed plants to numerous Cook Island families to grow, with crops sent to his farm for processing via a dehydration system he has set up, and a bulk order of several thousand plants are on their way from Fiji for planting.

The Ministry of Agriculture is on board too, providing potting mix, pots, perlite materials and shad houses to nurture propagated plants.

The goal is to plant 10,000 breadfruit trees by 2026, milling it for local consumption in a commercial-scale mill, and down the track, exporting to the Northern Hemisphere.

“It’s a project that has real economic benefit, and it’s healthier for the planet and for the people,” says Jeanette.

However, the GEF application process halted Danny’s plans. It had received positive feedback, but further detail was required for funds to be granted.

Enter Jeanette, whose help Danny sought to fine-tune the application.

“They loved the concept for his project but, English being his second language, he was stymied, he’d done everything he could do,” says Jeanette.

“Danny came in to see me many times over the course of six weeks or more to fine-tune the application, he’d already done the budget, he’d done the work, he just needed someone to take it to the next level.”

In July 2022, we found out the funding from the UNDO Global Environment Fund had come through and Danny is now underway with his exciting project.

“What Danny has achieved is phenomenal. As soon as he started talking about it, I thought - what a fantastic project."

Jeanette is not new to applications, processes or governance, having worked for numerous non-profit organisations in the past.

The former secondary school sports director decided to share her skills and knowledge with VSA a few years back in Timor-Leste where she supported a social enterprise that employed people living with a disability.

She returned home when COVID-19 struck, then took on her current organisational development adviser’s role in the Cook Islands last June.

The mother-of-four and nana of five has been back and forwards amid COVID, e-volunteering from her Palmerston North home when she’s not in-country.

Her desire to volunteer for VSA was sparked as a youngster, but she waited until her family had grown up and left home before volunteering.

” I remember someone coming to my primary school to talk about what they were doing with VSA, so from a very young age I always knew I’d do it, it was just something that would happen in time.

“It’s such a good organisation and we’re so well-supported in the field, which makes it so easy to do.

“I figure you can stick to the daily grind or go out and have a few adventures, live in a different culture and country, and do a bit of good along the way, it’s hugely rewarding.”