03.06.2020 - Beekeeper David Cramp is itching to get back to Tonga and his newly established bee colonies as soon as VSA can put him on a plane post COVID-19.

David, temporarily located in Wellington due to the pandemic, maintains regular contact with his Tongan colleagues via video, Zoom and phone. It has meant he is still able to be involved in regular checks of the newly established beehives. These checks ensure the bees have enough to eat and that they are healthy. But it’s not the same as being there on the ground.

“Beekeeping is very practical,” says David. “While it’s been great to keep in contact with Zoom, I am very keen to return to Tonga when it is safe to do so. I’m very keen to see the bee project reaching a sustainable basis in Tonga, as it is vitally important to food security and economic diversity.”

David arrived in Tonga at the end of January and had just seven weeks in country before VSA’s decision to relocate volunteers back to New Zealand due to COVID-19. In the short time he was there, David laid the groundwork for a profitable new community beekeeping project. With the support of local non-profit organisation Ohai Inc, he teamed up with local beekeeper Lopeti, who already understood the basics of beekeeping.

Lopeti was eager to learn from David, and in turn he taught David about local crop systems and the seasonal changes that affect the honey bees’ life cycle.

There were no managed bees in hives when David arrived.

“People would ring up and say, ‘I’ve got bees in my ceiling, can you come and get them’,” he says. “We’d go and rip the walls down, get the bees and their combs out, get them into hives and move them. One colony came from the roof of the Royal Villa which was built by His Late Majesty King Tupou V and is currently used for guests of the Royal Family including more recently the Duke and Duchess of Sussex. We had to have a cherry picker to get up there. 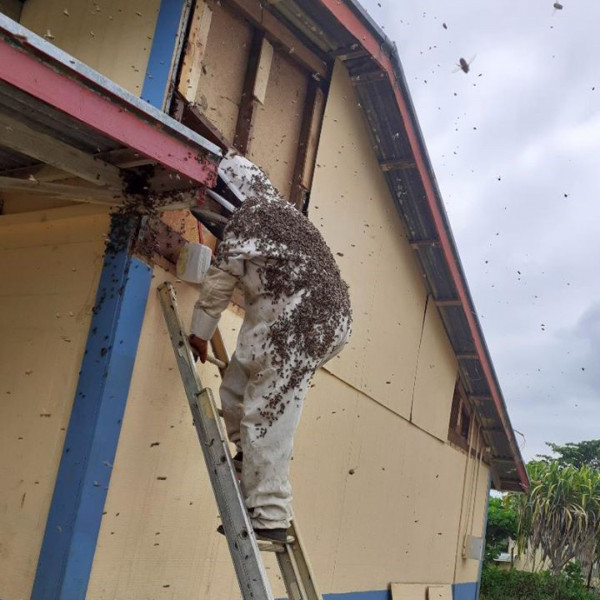 Taking bees from a primary school wall. David climbing down the ladder and a large part of colony have landed on his back.

“In the end we managed to set up four sites, each with four or five hives -- one on the grounds of the New Zealand High Commission. Her Majesty Queen Nanasipau’u Tuku’aho knows about the programme now and has expressed a wish to have bees on her own land. 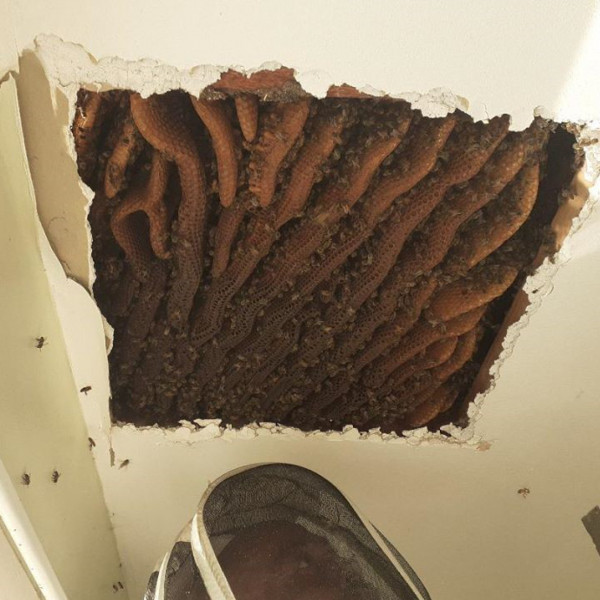 A colony in the ceiling of a house.

“So we got a lot done in the time I was there.”

David says the European honey bees in Tonga were likely brought by Wesleyan missionaries from Australia in the 1800s. The bees adapted to local conditions, harvesting honey and pollen from newly introduced crops like squash and onions but also from Tonga’s many invasive wild flowers like morning glory. “Everyone hates them, but the bees love them,” David says.

Ohai regards VSA’s beekeeping project as one of their most important. Indirectly the project is related to Ohai’s focus on climate change, as resilient and better agricultural practices might help Tonga to adapt to rising sea levels.

David sees a future tourist and cruise ship market in Tonga for well packaged hive products like lip balm, mead and of course honey. Such production has the potential to supply a good additional income for beekeepers.

“Everyone is keen from the Prime Minister down,” he says. “But to be truly sustainable you need to train beekeepers.”

Accordingly David and Lopeti devised a plan offering beekeeping lessons for interested locals as well as for Tonga’s prestigious Tupou College which was keen on introducing bees into its regenerating rainforest area. Work was planned with a women’s group to explore developing marketable products from the hives.

“It was all due to start the day after I had to leave,” David says. “But it hasn’t done so and we are still looking at ways to deliver the training programme in my absence.”

The beekeeping project has certainly not ground to a halt. David, who’s the author of several well-regarded books on beekeeping, has used his time back in New Zealand to finish off a manual on beekeeping that will be translated into Tongan. He’s also put together a syllabus for a beekeeping course which is supported by Australian Government’s Tonga Skills for Inclusive Economic Growth Programme and submitted for accreditation with the Tonga National Qualifications and Accreditations Board.

“My role is to build the capacity of local beekeepers, to a point where the local project can operate independently,” David says.

And as if he doesn’t have enough on his plate already, there’s a couple of magazines that want articles about the project. One day, David muses, “if it’s worth it, there might even be a book”. 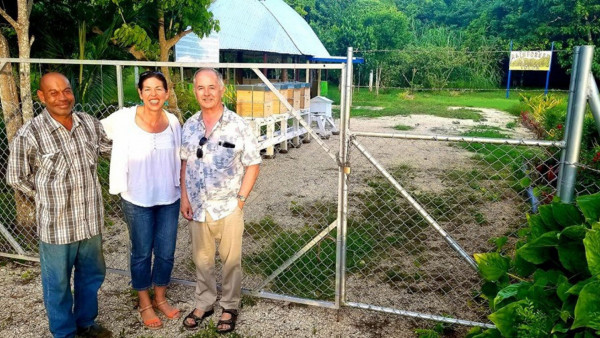 Lopeti, Debra Allan (Ohai Board Secretary), and David at the Tupou College site. Toloa Rain Forest regeneration project opened in 2018 by Prince Harry and Meghan. Our hives behind.