31.08.2020 - As his 65th birthday loomed over the horizon, engineer Bruce Corbett decided it wasn’t time yet to become “a boring old fellow”. His answer? Signing up with VSA to help put together a water and sanitation management strategy in the Cook Islands.

Rhodesian-born, Bruce came to Aotearoa New Zealand from South Africa in 2009. “I’ve worked since the 80s on water systems in developing countries in Africa,” Bruce says.

“My VSA contract was originally a year, but I extended to 16 months because things were at a point where the extra time allowed me to kick the ball over the line. I could walk away saying I’d achieved what I set out to do.”

Bruce was assigned to work with the division in the Office of the Prime Minister responsible for the outer islands, or Pa Enua.  Spread out over a vast area – the Northern group is 1300 kilometres from the Southern group – the islands have limited access, declining populations and variable climates. 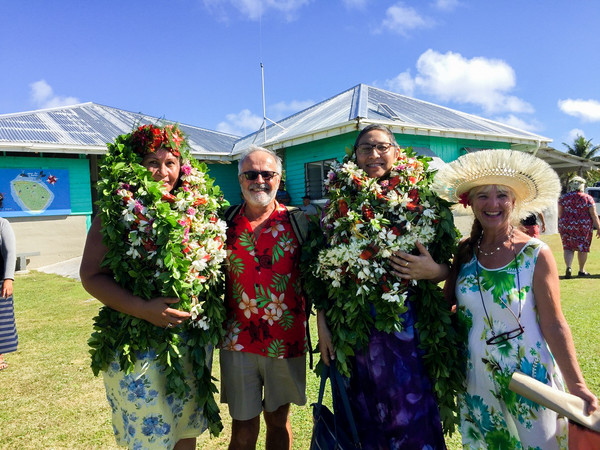 Bruce on his arrival on Mauke with the late New Zealand High Commissioner Tessa Te Mata and her sister.

“To get from the main island of Rarotonga to Rakahanga atoll in the Northern group by air and boat return can cost you more than a round-the-world airticket,” Bruce explains.

“Supplies to these islands might not arrive for months, which creates complex and difficult problems. If you have a piece of machinery with a missing part it can sit idle for a long time, and I think that influences the way people plan their lives. If the boat comes in, everyone stops what they’re doing and their whole world changes for two days.”

Resilience in the face of climate change was a key part of Bruce’s remit. He helped develop a Green Climate Fund proposal presented at the Round-Table meeting held in Rarotonga.

Also, soon after he arrived he found that the four mobile desalination units New Zealand had provided to help combat the 2012 drought had gone into a container and not been maintained, to the point that one was beyond repair.

By the time he left the three remaining units were up and running and a new one had been brought in. Crucially, local training was undertaken and responsibility for ongoing maintenance had been written into the relevant job description and budget set aside.

“As VSA volunteers we’re not consultants to tell people what to do,” Bruce says. “We provide mentoring assistance. You have to be interested in the local culture, recognise the constraints people face and adjust your expertise accordingly. If you go in and insist people do things your way, it will all come to a halt the moment you fly out.

“The key missing element I picked up was the lack of coordination between the people responsible for different aspects of water and sanitation management – health officials, education, engineering and government. So rather than more resources, there was a need for more coordination.”

Bruce’s response was to build relationships and trust by talking with the various people involved about how they might work together. “By the time I left, they were telling me what the problems were and what they would do to fix them,” he says.

For Bruce and his wife Anita, the whole VSA experience was about engagement with the people they met.

“In the West, you worry about imposing on other people,” Bruce says “but in Rarotonga we became part of the community. Kids shouted ‘hello’ as we drove around. We were invited to family functions. You greet everyone and you share.

“Anita volunteered as a school aide working with children with educational difficulties. And she’s become a very good hat and ei (garland) maker after being taught by the local women on Mauke and Rarotonga.”

The economic boom in the Cook Islands on the back of tourism worries Bruce, as does the move away from local production in favour of imported foodstuffs. “The growth in tourism is a real challenge and the effects are sad to see,” he says.

His VSA assignment was Bruce’s first experience of volunteering and he says he and his wife loved it and would do it again, whether in the Cooks or elsewhere. That 65th birthday was spent in Rarotonga, where Bruce’s visiting brother laid out a birthday greeting in coconut pieces on the lawn. Two days later, the pieces were rearranged to mark Bruce and Anita’s 40th wedding anniversary. 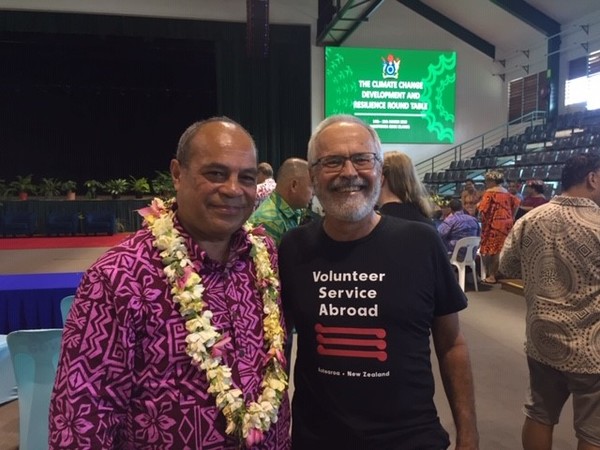 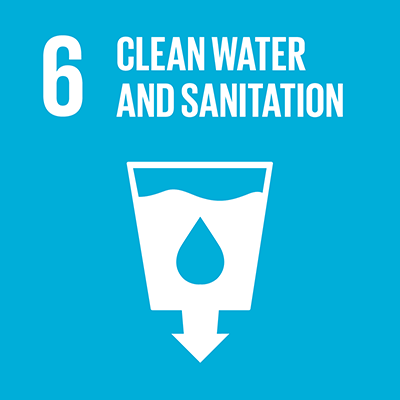