Being on the VSA Council

We want Council Members from all backgrounds with the energy and drive to make a difference - change makers to build on the achievements of this amazing organisation. They'll be motivated to achieve VSA's vision and live our values, and with the time, passion and integrity to take on all parts of the role.

We value independent thinkers, who like working as a team and are happy to accept collective responsibility - people who are interested in learning about governance or with direct experience, and, ultimately, want to help set VSA's strategy and ensure we remain on course. Does this sound like you or someone you know?

Council Members are elected by  VSA's members, and membership is open to all.

To stand, you should have what we are looking for in at least one of the areas below. 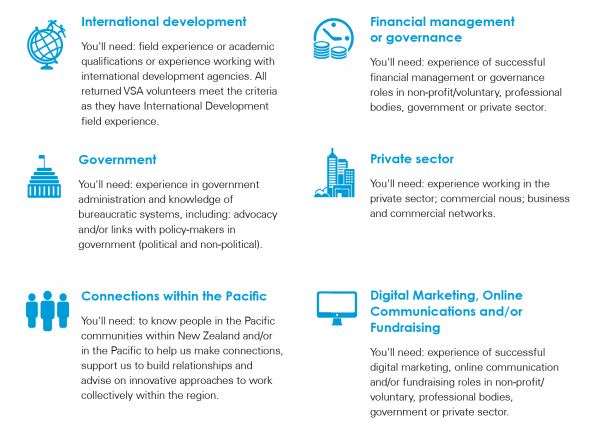 What is the VSA Council?

VSA’s Council is our governance body – it sets the strategic direction for the organisation. All Council members must be members of VSA, and they are elected by VSA’s members. We have an election process every two years, and all members are invited to participate.

There is a minimum of eight Council members elected by the membership. Our constitution sets out a “rolling” election cycle, whereby half remain and half completed their term, creating a minimum of four vacancies at a time. This year there are six vacancies due to Council members remaining during 2020 as elections were unable to be held.

Council Members, just like our overseas volunteers, give their skills and time and have their costs covered. The Council meet in person four or five times per year: usually in February, May, August/September, November (AGM) and December. Meetings are at VSA’s office in Wellington, or with the agreement of the Chair, can be joined online.

Council Members are volunteers and are unpaid, but travel and accommodation costs are met, and a small per diem payment is provided for incidental costs.

Who can be a Council Member?

VSA is an Incorporated Society, and we have a constitution which outlines rules about how we are governed. Our constitution requires Council members to be resident in NZ.

Candidates need to be VSA members. All New Zealand residents can be members. There are Financial Members, Life Members and Honorary Members. Financial Members are those people who support VSA through an annual subscription. Volunteers become Honorary Members and receive this for a minimum of 12 months on their return. We also have Life Members who are a group of people who have historically made a significant impact on the organisation.

The constitution also specifically rules actively serving volunteers as being ineligible to serve on the Council. As noted in the residency requirement, you may stand, but if you were successfully elected, you would need to return from your overseas assignment.

All candidates will need two members to support their nomination. We can assist in putting people in touch with members to help with this process.

What is the Election Process?

You can consider being nominated or nominating someone else (with their permission) to be a candidate for the VSA Council Elections. Register to receive a Nomination Pack or download information on our website {LINK}. You will need to complete a nomination form that is signed by two members, complete a profile for the voting pack including a recent photo.

Nominations close on 30 June 2021 and voting packs are sent to all voting members in August 2021. Voting is according to a preferential system and results are announced in October 2021. The newly elected Council takes up office at the Annual General Meeting in November 2021.

Who is the Returning Officer?

Cristine Werle, VSA’s Executive Coordinator, is assisting with the process, and you may receive communication from her in relation to any questions you have regarding the process.

That’s OK, we are happy to accept photos of each page of each form. You should just check that all the information is clearly visible and your photo is a recent individual photo suitable for a voting form.

I’ve sent in my nomination – what’s next?

I still have questions – where can I find answers?

If you still have a question, please send an email to election@vsa.org.nz. We will endeavour to reply within a day or two.