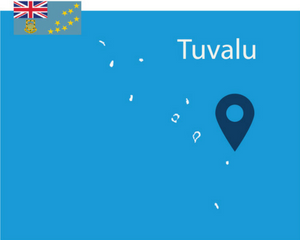 Tuvalu is the fourth smallest nation in the world, comprising nine inhabited islands with a population of 10,640 (2012 census). The country rarely exceeds 3 metres above mean sea level, with an average elevation of only 1.83 meters, making it one of the most vulnerable countries in the world to the impacts of climate change. Tuvalu means ‘group of eight’ referring to the country's eight traditionally inhabited islands, but today it comprises four reef islands and five atolls.

Tuvalu is one of the least developed countries in the world, with few natural resources. Economic development is constrained by a shortage of skilled workers, high unemployment, weak infrastructure, high population density in urban areas and geographical remoteness.

At its widest point, Tuvalu only spans about 800 meters. Classified as a least-developed country, the islands contain very few natural resources. Tuvalu’s main sources of income are from fisheries, ‘.tv’ internet domain revenues (12% of Tuvalu's 2015 budget), and remittances from overseas. Tuvalu also receives income from the Tuvalu Trust Fund (TTF).

Climate change is a major issue. Most of the country sits just one or two metres above sea level, and is vulnerable to king tides and cyclones. Although health indicators have improved in recent years, Kiribati has the highest infant mortality rate in the Pacific. There is low life expectancy and a high incidence of nutrition-related non-communicable diseases.

The traditional community system still survives to a large extent on Tuvalu. Each family has its own task, or salanga, to perform for the community, such as fishing, house building or defence. The skills of a family are passed on from parents to children.

Most islands have their own fusi, community owned shops similar to convenience stores, where canned foods, bags of rice and other basic necessities can be purchased.

What we’re doing in Tuvalu

VSA worked in Tuvalu from 1978 until 1996. Over this period, five volunteers worked in Tuvalu as teachers and youth workers. In 2017 VSA responded to enquiries to send further volunteers to Tuvalu. Our programme in Tuvalu is small but focuses on some important areas. We work with the Department of Environment to support Environmental Impact Assessment regulations, provide support to the Aviation Authorities to upgrade safety procedures, and work with the Education Department to train education providers in positive behaviour management techniques. The VSA Tuvalu Programme will be managed by the Kiribati & Tuvalu Programme Manager from September 2018.

VSA’s work in Tuvalu is a mixture of short-term assignments around technical and management advice, and longer assignments building skills and capacity in the public education sector.