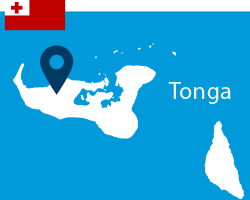 The Kingdom of Tonga has welcomed VSA volunteers into their communities since 1965. Volunteers have worked in education, health, community and economic development, and agriculture.

The Kingdom of Tonga is unique in the South Pacific in being the only country never colonised by a foreign power.

The Prime Minister of Tonga is the country's Head of Government, and the king, currently King Tupou VI, is the Head of State. Tonga’s monarchy is the only surviving monarchy in the Pacific with a royal family whose lineage dates back as far as 875AD.

What we are doing in Tonga

VSA has strengthened its 55 year relationship with a renewed strategy focused on good governance, sustainable livelihoods, health and wellbeing, and community development.

In Tonga, VSA and partners work together across multiple sectors including education, health, agriculture, climate change and economic resilience.