The Solomon Islands has over 900 islands, 5,000 rural villages and 550,000 people. Between 1999 and 2003 it experienced a period of conflict which took a heavy toll on the country and left a need for reconciliation and on-going peace and security measures.

A request for assistance by the government in 2003 led Australia, New Zealand and other Pacific Island countries to form the Regional Assistance Mission to the Solomon Islands (RAMSI) which restored peace and security. In 2012 RAMSI began a transition into a smaller, police-focused mission, removing the military component and working with partners on sustainable development. This transition has now been completed, with the last of the military personnel leaving the Solomon Islands in August 2013. There are still 250 New Zealand and Australian police officers helping to build capacity within Solomon Islands community policing.

Forestry products are Solomon Islands’ main export, with the logging industry accounting for around 70 per cent of exports and 10 per cent of government revenue. Many of the country’s natural timber resources have been exploited by foreign companies leaving little benefit for the local population. There has also been an increase in mining activity throughout the country. 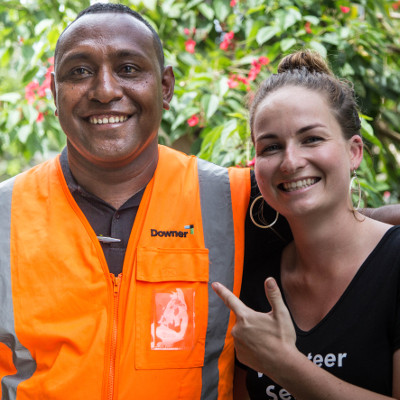 What we’re doing in Solomon Islands

In the 2018-19 year, VSA volunteers undertook 25 assignments with 16 partner organisations in Solomon Islands.

VSA has established a clear role in the Solomon Islands through its ongoing
partnership with Downer as well as through its relationships with the
Solomon Islands Government. The value of VSA’s assignments and long-term corporate partnership with Downer is demonstrated with Downer Engineer, Roseanne Ulunga, volunteering as an Infrastructure Adviser with the Ministry of Education and Human Resources Development. During her assignment Roseanne helped build infrastructure but also developed capacity for youth engaged in her project.

Working as a Univol research assistant for the Honiara City Council, Lewis
Johnson was tasked with conducting research among young people to ensure a Youth Hub would meet their needs. He has used the opportunity to identify youth groups and projects he can continue working on to make an impact.

Pip Austin has brought a wealth of marketing and communication experience to the Solomon Islands Broadcasting Corporation (SIBC), and with it helped forge a strong relationship with a new in-country partner.

Read more about how VSA Downer volunteer cadets are improving education facilities in the Solomons.